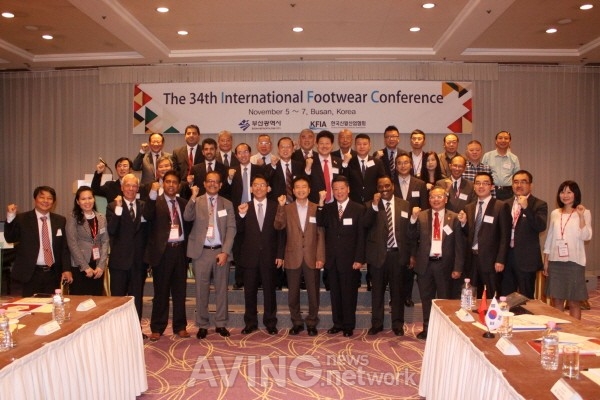 Presidents from footwear companies and main distribution countries come to Busan, a mecca for footwear!

The 34th CIFA (Confederation of International Footwear Association), where presidents from footwear companies and main distribution countries took part, was held at the Westin Chosun Busan on Nov. 6.

Presidents from the 12-member nations of CIFA, which account for 83.7% of the world's footwear production, visited Busan. At the "34th CIFA", they shared the current state of the footwear market and had in-depth discussions about the future of the footwear industry.

Gwon Dong-chil, chairperson of the 34th CIFA, said: "The international footwear market is dramatically growing due to ICT technology convergence. I hope this meeting will create an opportunity for footwear companies to grow more and leap ahead in this field."

Kim Ki-yeong, director of the Busan Job and Economy Agency, said: "To preserve and encourage the footwear industry, Busan City is supporting various policies and successfully carrying forward our plans to make the footwear industry an international premium sector. I hope the friendships and mutual development of all global footwear companies will bear meaningful results through this meeting."

In addition to this meeting, "Busan International Shoe Show 2015" provided visitors various things to see, as it ran a pavilion for traditional and modern footwear of the 12 CIFA-member nations.